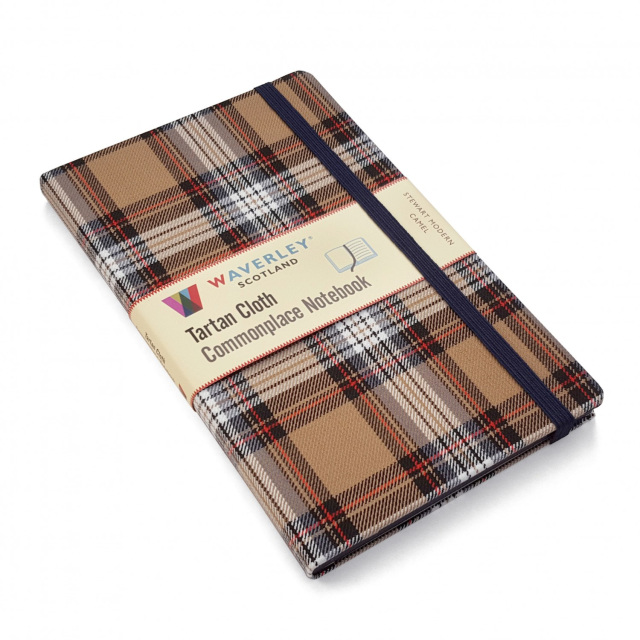 The Stewart Modern Camel tartan featured on this large format notebook is predominantly light brown in colour, with white black and red, and has a light and contemporary feel to it.

And the other day, someone called us and accidentally referred to the notebook as 'Stewart Modern Handsome' - no disrespect to camels, but they were right. It is handsome! It is one of over 30 tartans associated with Clan Stewart. The differences incorporate different branches, different areas of origin and further variations using labels such as “dress” and “hunting”. The name Stewart reflects the Clan’s illustrious origins. The original family name, from Brittany, had been fitz Alan. Walter fitz Alan (1110-1177) was High Steward of Scotland during the reign of David I (1124 -1153). The name Stewart is derived from the title of that office, and Walter (d. 1246), 3rd High Steward of Scotland took Stewart as the family surname.

In 1315 Walter Stewart, 6th High Steward of Scotland, married Marjory Bruce, daughter of King Robert the Bruce. The children of the marriage therefore had royal blood and a claim to the throne of Scotland. Clan Stewart’s royal dynasty flourished for over three centuries. And it was during that dynasty that the union of the thrones, and governments, of Scotland and England would occur. Clan Stewart has affiliations to Clan Lindsay and Clan Donald. The motto of the noble Stewart Clan is Virescit vulnere virtus (Courage grows strong at a wound).

Sold out
Add to Cart